Darren Gutierrez has his own business, Raytek Leak Detection, servicing the Bakersfield and Visalia areas in California. He provides services such as leak detection, pool repairs, structural crack repairs, in both residential and commercial settings. Darren G. met LeakTronics Founder, Darren Merlob, about 7 years ago. This post is about his journey with LeakTronics.

Before learning about LeakTronics, Darren G. was in a different industry.  He knew nothing about the leak detection industry and the professional methods or equipment available to locate leaks. His friend suggested a career in leak detection as there weren’t too many contractors performing this service in his area at that time. Darren G. knew that was it. He was determined to learn, grow and succeed.

He searched the web and found some training that he was not too happy with. This led him to search again until he came across LeakTronics. He decided to take the LeakTronics Online Leak Detection Training Course and just like that, he became a Certified Leak Detection Specialist.

“I didn’t know anything but I learned and started getting calls. I became the “go-to” guy.  When others in my area can’t figure it out, I get a call.”

When asked about his go-to LeakTronics equipment, Darren G. says he owns multiple kits from LeakTronics but the most essential items are the Pool Scope and Side Mic. They’re his go-to tools when he’s looking at pools. “The F.L.A.S.H. System and the camera are great backup tools too depending on how complex the situation is.”

“One of my biggest competitors has nothing like that. I went to a job last week and the customer said that the other contractor referred them to me because I have the right equipment.”

Darren G. added he is starting to get noticed in the Mammoth area which is over 250 miles North of his current location.  His most challenging job was at a hotel.  The equipment room was downstairs in the parking garage and he was working by himself.  Sometimes it’s difficult when you need to be in two places at the same time.  Some of the plumbing on the spa needed to be simplified and some pipes went through heat exchangers. Every time he was up there working it was snowing. Plumbing was inaccessible and everything was running 15 ft. underground which made it challenging. Darren G. says he knew where the leak was but it was tough to access it. He had to reroute plumbing and use what the hotel had to keep the pool running.

When asked which LeakTronics equipment helped him the most on this challenging job, Darren G. says: “I used the Pool Scope, Pipe Mic, the camera, I used it all. I brought everything I had. I wasn’t the first guy to come up there. Other contractors were walking off the job but I stuck with it, found the leaks, and repaired them.”

One of the repairs that Darren G. fixed was a second-floor spa. Underneath the spa, there was a hallway with a staircase. On either side, there was a pizza restaurant and a deli. The spa was leaking into both units. There was another leak in the return pipes encased in concrete which, although still difficult, he was able to trench and dig down to make the repair.

Things are working out for Darren G, however, when you’re the go-to guy in your area, expansion becomes more challenging. 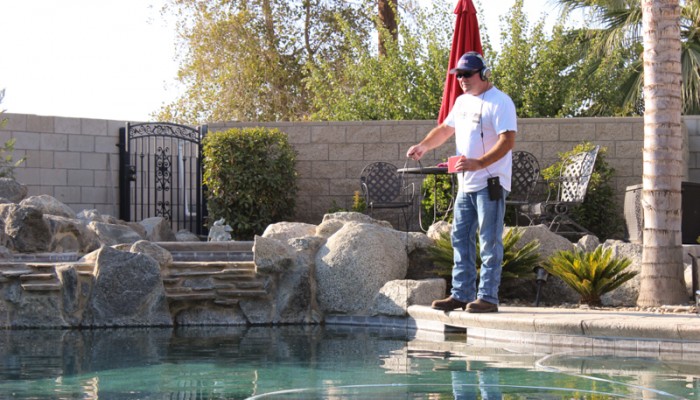 “I learned a lot from LeakTronics and Darren Merlob. If you have the brain and the know-how, you can use the equipment by yourself and I do it all the time.”

“I also believe most of it is also talking to the customer. Once I start explaining to them about the leak, what the situation is and how can we repair it, they know right then and there that’s the guy. Because I know what I’m talking about and people trust me. They even refer me to neighbors and friends.”

This can be you too. You can build a successful business or even grow your current one. Check out the LeakTronics Leak Detection Training Courses and the equipment. For more information, visit www.LeakTronics.com or call us at (818) 436-2953.