The Art of Non-Invasive LeakDetection

Leak detection technology has come a long way in the last decade. The days of bucket tests, diving suits, and pressure tests are becoming outdated. This is because today’s equipment features incredibly sensitive listening devices which, when put directly into the pool, allows users to zero-in on even the smallest leaks, whether it is from a crack in a pipe 1.5 m (5 ft) below ground, or a minuscule tear in a vinyl liner. That said, hydrophones have not only gotten an upgrade, but also have an expanded use with respect to leak detection. With high sensitivity and filtering technology, technicians can stay dry and listen for any cracks, leaks, or separations in the pool shell and plumbing lines.

Up until recently, the best option for high-tech leak detection equipment was made for plumbers and repackaged for the pool industry. With only a listening deck plate and probe, there was no way to listen to the shell for leaks around light niches, conduits, jets, etc. Today’s equipment was developed with the idea that leak detection does not have to be long, difficult, or invasive. When a pool leaks, the weight of the water pushing through a crack creates a distinct sound, which can be picked up by a hydrophone. The closer the technician is to the leak, the louder it becomes. These non-invasive techniques simply require the technician to listen to a still or ‘static’ pool.

Prepping the pool for inspection

When working with this type of equipment, it is important customers know their static pool must be clean and filled to the proper level prior to the technician’s arrival, as he/she needs to be able to see the main drain to perform a thorough leak detection. With the pool equipment off, the hydrophone is placed directly into the pool to listen carefully to the shell, including return lines, jets, floor drains, suction lines, and lights. Almost four per cent of all leaks are found within a 0.9-m (3-ft) radius of the pool and, for this reason, many of the leaks located using this technology are found using the hydrophone.

Smaller hydrophones, known also as pipe mics, have been made to check return lines, spa jets, and cleaning or skimmer lines within a plumbing system. These mics can be inserted into the line in question, and as the technician gets closer to the source of the leak, the sound will become louder. Usually, these mics will only cover a 1.5-m (5-ft) radius from the pool, mainly because most leaks are typically found within this area.

When locating a leak within the pool plumbing, there are times when a sound must be created. Unlike the pool shell, a plumbing leak will not make static noise when it is far away from the pool. Therefore, using a pressure rig, the technician can inject a mixture of air and water into the line in question. This mixture will create a distinct boiling noise when it reaches the point of the leak. Using a deck plate, equipped with the same sensitive microphone, the boiling noises can be heard through concrete or other hard surfaces. Long, soil probes have also been developed, which allow technicians to listen for leaks through grass, gravel, or other landscaping.

Sonde-location technology (an instrument probe that automatically transmits information about its surroundings underground, underwater, etc.) has also emerged as an important tool for leak detection jobs. Once a leak has been detected, locating the mic beneath the ground used to be a difficult task. Today, however, some hydrophones have sonde technology, which makes it possible to pinpoint the location of the mic underground. These units are pushed or pulled completely through the plumbing line. Once through, the technician is able to listen as he/she pulls the mic back through the pipe slowly. When the leak can be heard at its loudest point, the technician stops pulling and plugs the hydrophone into a driver, which enables the mic to send out a signal (most are 512 Hz). A receiver is used to scan for the signal, which alerts the technician to the precise location of the leak beneath the ground.

This technology is not only available for listening equipment. Cameras have also been equipped with sonde location abilities. While cameras should not be used as a method of locating leaks, the technician can use this equipment to get a visual confirmation of what he/she hears beneath the ground.

After hearing a leak, the technician can send a camera/video scope into the line in question to get eyes inside the line. Many are also equipped with dye injectors, giving the technician the ability to perform dye tests in places that were impossible to access. After the technician has visually confirmed the location of the leak, he/she can use the receiver to scan for the signal the camera relaying below ground. This equipment not only helps to back up the technician’s findings, but also to document jobs, as well as bypass existing lines when performing repairs. 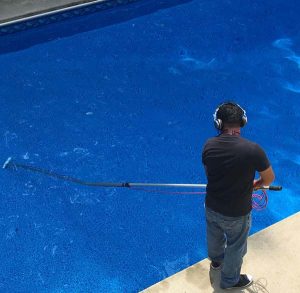 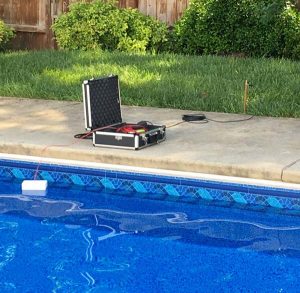 When it comes to detecting leaks, vinyl-lined pools have always posed their own set of challenges. They are larger than most other types of pools and, as a result, testing can take more time and effort. Leak detection technology made specifically for these pools work off the same general idea (listening for leaks), but has been tailored to scan the liner, too.

By placing a float with a metal plate into the pool, the technician is able to introduce a small square voltage current that evenly blankets the entire pool. Vinyl acts as an insulator, while a small hole or tear acts as a ground. The flow of electricity in the pool will immediately seek out the ground. Probes are then used to scan the floor and walls of the pool. Working much like a voltmeter to find the ground, it creates a beeping noise at the point of a leak (ground). While false-positives can plague this type of leak detection, there are steps technicians can take to minimize them (e.g. using a hydrophone to check for any metal in the pool prior to the square voltage to confirm there is, in fact, no leak).

Structural cracks found in the floor or walls of concrete and gunite pools can be detrimental to the structural integrity. When concrete moves and shifts, it will crack and the extent of the damage depends on the amount of movement. Shifting can occur due to earth movement, settling, or poor workmanship during construction. Over time, as water seeps through the structural crack, it will erode the soil and cause even more shifting. If left unrepaired, voids in the concrete could occur. Further, cracks and voids will not only become larger, but also more expensive to fix. No matter how much or little the structural crack is leaking, it needs to be repaired 100 per cent of the time, and as soon as possible.

When a crack in a concrete pool is spotted, a leak detection scan must be performed. In the past, when a technician spotted a structural crack, his/her only course of action was to dive into the pool in a wetsuit and slowly dye test the entire crack. However, electronic leak detection equipment has come a long way. With new hydrophone technology, locating leaks due to structural cracks has become more accurate and a lot easier to perform.

The weight of the water trying to push its way through any open spaces in the crack will create a distinct ‘whooshing’ noise. Using the same hydrophone equipment that can locate leaks within a vinyl-lined pool, the technician can now simply drop the microphone into the pool and listen to every section of the crack. By slowing dragging the hydrophone along the midline of the structural crack, the technician can pinpoint where the leak (or leaks) are located by listening for the area(s) where the sound is the loudest.

Once the leak is found, a dye test can be used to back up what was heard when using the hydrophone. After all of the leaks have been located and confirmed, the pool can be drained and repaired.

An increasing number of pool service companies are adding leak detection projects to their business offerings, as it takes less time and effort than in the past thanks to the advancements in technology to tailor-made equipment specific to the aquatics industry. While these new tools may appear intimidating to some, the abundance of educational resources available for pool technicians makes it easy for any company to offer leak detection services.