When pools and plumbing leak, the signs of water loss come in a variety of ways. It’s natural to think that when you see a puddle of water it would be a sign of a leak right there. Don’t chase water, it leads to a big mess and an otherwise bad day.

Kevin Mayweather was losing water and he was convinced it was leaking out the side of his pool, or from the trunk line. After misinterpreting hours of blog posts and random websites, Kevin was absolutely sure he knew what was leaking, and where. He had a short patio that wrapped around the back of the pool shell and just at the edge of the deck, water was puddling along the edge of the concrete. He was convinced that’s where the leak was.

After a proper leak detection was performed, he was in fact losing water. In the skimmer at the other side of the pool! It was nowhere near where he saw the puddle. Listening throughout the entire pool, using LeakTronics Push Mic in the trunk line and performing static pipe tests – there were no signs of a leak occurring anywhere at the back end of the pool where the saw the puddling.

Perplexed, he started digging. After a long and messy afternoon, Kevin discovered that the neighbors irrigation line, which ran closely along the fence between their properties, had a separation in the pipe … almost five feet away from where he saw the water! It had nothing to do with his property or his pool, it just happened to puddle up at the edge of his patio.

We want to say this again, don’t chase water!

Water takes its own path. It might come from a leak at an elbow, but then it comes to the surface ten feet away after running along the pipe and settling in the middle of the yard. You just don’t know where the source of a leak is until you perform a proper leak detection.

At LeakTronics, gear is designed to demystify those inaccurate assumptions that tell people a puddle means there is a leak. A puddle can form overnight when irrigation sprinklers run. Some hardened dirt can cause a puddle to sit for long periods of time after splash-out happens in a pool. Like in Kevin’s case, water can seep under the surface, through landscaping where it travels for many feet before puddling in an area you see – you just don’t know where it starts … without a proper leak detection.

Some time ago we shared a video about an Irrigation Leak Detection we performed. What began with the homeowner seeing puddling at the edge of the driveway turned out to be a pipe leaking under the middle of the driveway. The homeowner was ready to start digging up the lawn and instead, re-routed the pipe to avoid breaking concrete, once the actual leak was found.

Again, this explains how water seeks its own level and surfaces in places that might not be anywhere near the leak. With proper leak detection methods and sensitive listening equipment, precise and accurate leak detection is easy. Don’t chase water, find the source of the leak.

One more to see. This meter box at the street was filled with water when we opened it during a residential plumbing inspection. The leak was actually all the way up the driveway, two feet from where the shut-off valve was. Due to the slope of the driveway, the water ran back down the pipe and filled the meter box. 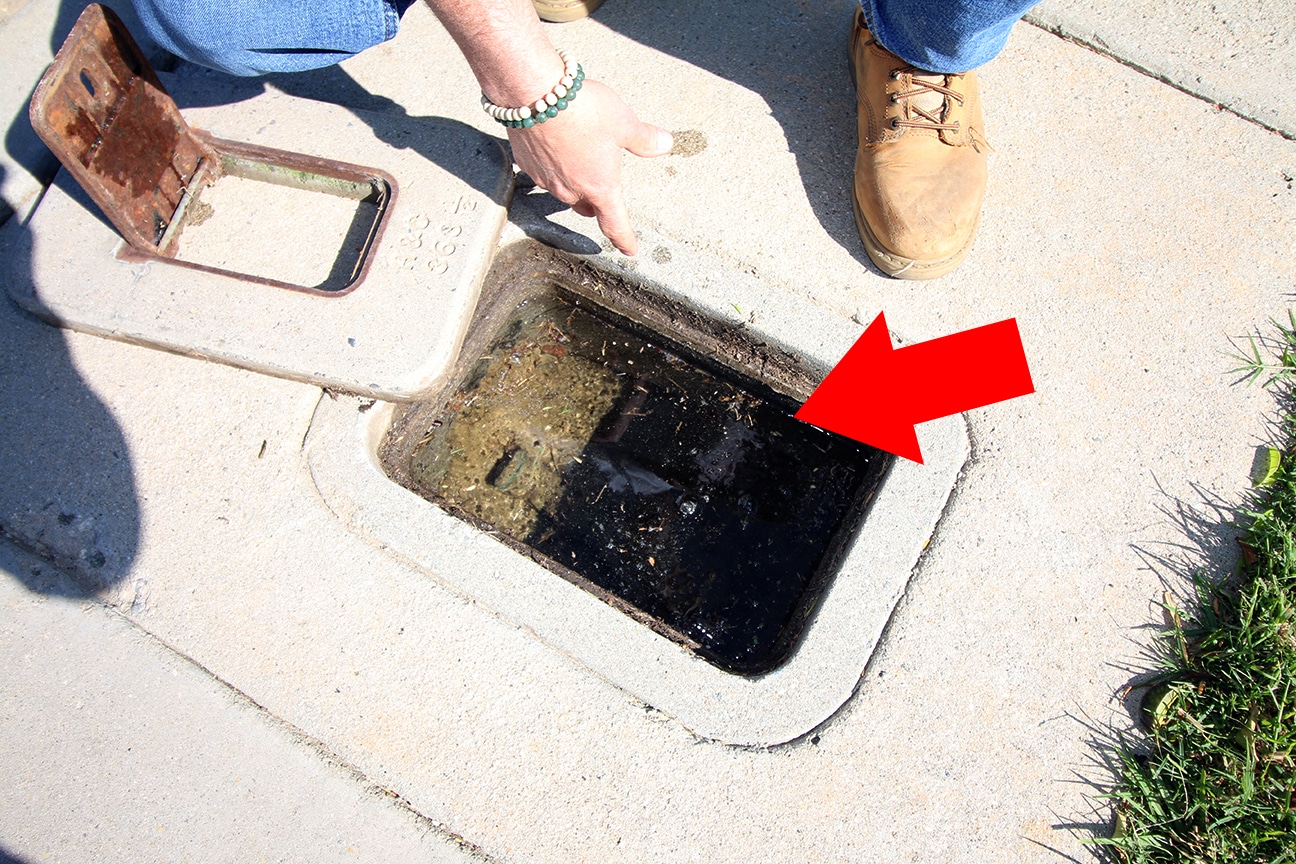 As with any leak detection, take all factors into consideration. Yes, you might see puddles, but that doesn’t mean that’s where the leak is. Start at the source and work your way through the system. If it’s a pool or spa, start inside the shell with your PoolScope and use the instructed methods LeakTronics teaches in their online training course. If it’s a plumbing leak detection, start at the meter where the water enters the property.

By simply walking through the right steps to listen to entire pool or property, wherever a leak happens, you’ll find it. You’ll also find, most of the time, it’s not near the puddling your customer saw that made them call you for a leak detection.

Learn more about online swimming pool and plumbing leak detection training packages, including equipment, at the links below.