In this episode of Turning Leak Detections Into Repair Work, we’re at the 4-Seasons Hotel in Thousand Oaks, CA. The swimming pool is losing water and we’re out to find the leak. It’s an indoor pool with a high volume of water and there is a separate sub-level control room on the other side of a thick concrete wall.

The pool itself has a trunk line that wraps the pool and multiple returns along the walls and the stairs of the pool and there is a detached spa that has been emptied during the process. The leak has been proven to be in the pool itself and the spa isn’t showing signs of water loss in it’s shell, plumbing or equipment.

We were called to identify the leak and we’ll be using the equipment in the Pro Complete Leak Detection Kit, and a Hand Held Video Pro 1.5 Camera with Sonde Technology to find the leak, identify it’s locations and to decide on what repairs need to be made to stop the leak. 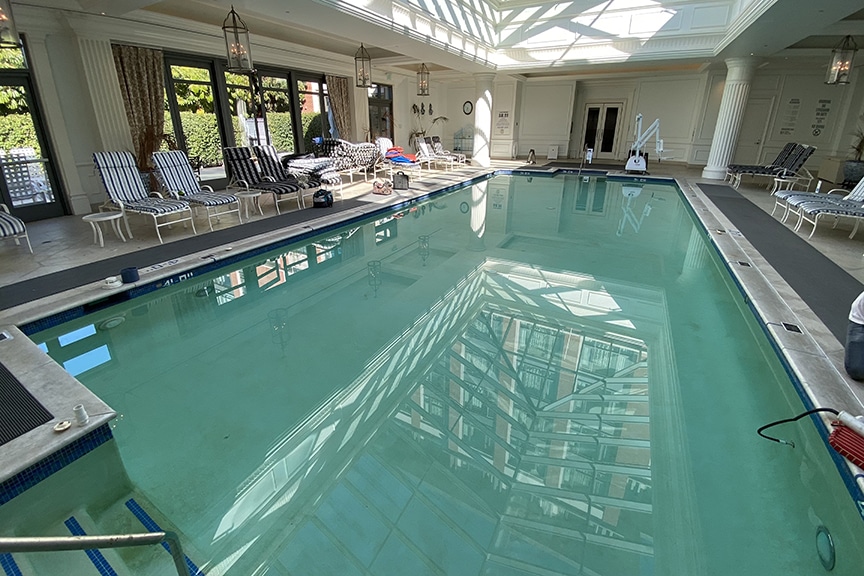 During the listening process to identify the leak, we used bursts of compressed air into the line to listen for the area where the air escaped the pipe. We identified where the pipe entered the pool area from the control room, a series of 4-inch pipes feed the pool. Ultimately, we were able to hear the sound of the leak in a specific pipe by listening under the tile patio area and on the pipe itself in the control room.

When we did identify which pipe was producing the sound of a leak, we opened the pipe at the valve in the wall and inserted the Hand held Video Pro Camera with the Sonde Head to take a look at what was going on inside the pipe. We inspected the pipe from the wall up into the pool where the 4-inch line fed the trunk line to the pool. This was 60 feet of distance and we saw it all.

When we identified the break in the pipe, it was by snaking the pipe into the wall, where it took multiple short turns from the control room, through the concrete and into the pool area. At the first elbow, a long crack was evident and we inserted a mirror and dye tested the crack to back up what we saw, and in fact, it was leaking behind the wall, below the level of the pool area deck. Unnoticeable from the pool area, but clearly visible from inside the pipe. 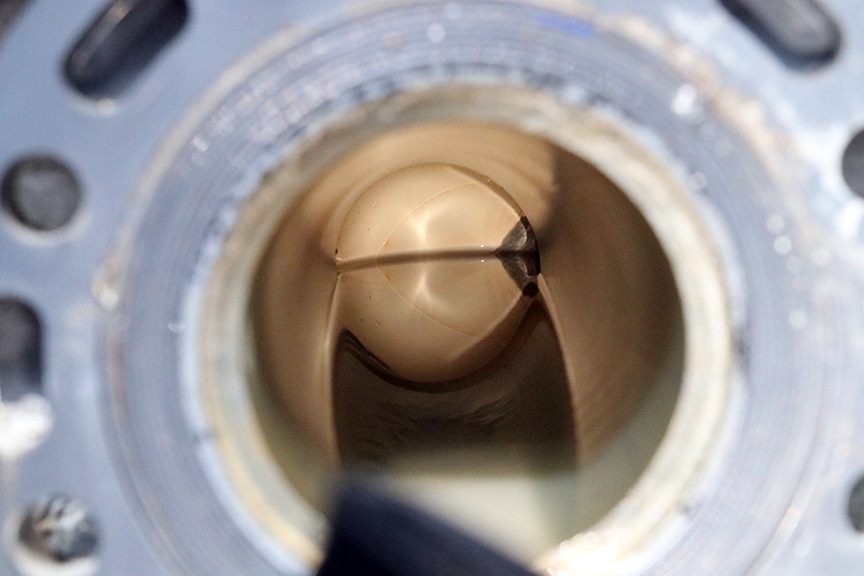 From inside the pool area, we were able to use the Sonde Locator to find where the camera head was at the leak. it happened to be right where we heard the leak using our Deck Plate and air induction method. Unfortunately, it was behind a wall, but the wall did provide an open area where the repairs could be made. However, access to that area required construction and planning and was discussed separately as part of our bid to repair the leak, which we will cover in a second video.

Stay tuned to see the repairs.